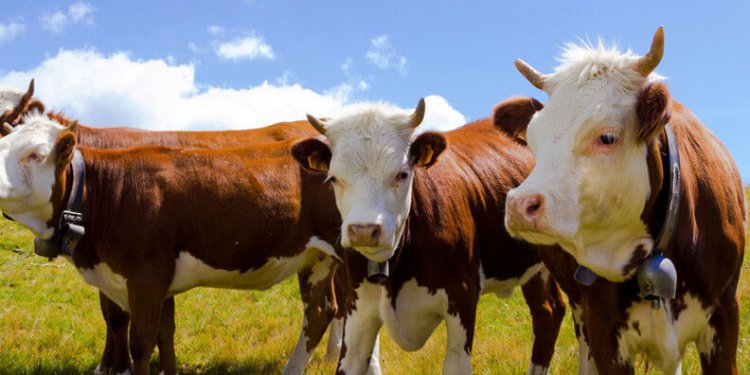 By reading this article you will realize that the dairy cows are no longer vegetarian animals. The dairy industry feeds them recycled meat mixed with regular grain feed. The recycled meat is derived by recycling slaughterhouses waste, dead animals such as millions of euthanized cats and dogs from veterinarians and animal shelters, and supermarket and restaurant waste.

Rendering plants perform one of the most valuable functions on Earth. They recycle dead animals, slaughterhouses waste, and supermarket rejects into various products known as recycled meat, bone meal, and animal fat. These products are used as a source of protein and other nutrients in the diets of dairy animals, poultry, swine, pet foods, cattle feed, and sheep feed. Animal fat is also used in animal feeds as an energy source.

One estimate states that some 40 billion pounds a year of slaughterhouse wastes like blood, bone, and viscera, as well as the remains of millions of euthanized cats and dogs passed along by veterinarians and animal shelters, are rendered annually into livestock feed. This way they turn dairy cows, other cattle and hogs, which are natural herbivores (vegetarians), into unwitting carnivores (non-vegetarians).

However without rendering plants, our cities would run the risk of becoming filled with diseased and rotting carcasses. Fatal viruses and bacteria would spread uncontrolled through the population.

"If you burned all the carcasses, you'd get a terrible air pollution problem, " or "If you put it all into landfills, you'd have a colossal public health problem, not to mention stench. Dead animals are an ideal medium for bacterial growth, " said Dr. William Heuston, associate dean of the Virginia-Maryland College of Veterinary Medicine at College Park, MD USA.

This is a multibillion-dollar industry, and these facilities operate 24 hours a day just about everywhere in America, Europe and other parts of the world. They have been in operation for years. Yet so few of us have ever heard of them.

Thousands of euthanized cats and dogs from veterinarians and animal shelters

Dead animals such as skunks, rats, and raccoons

Renderers in the United States pick up 100 million pounds of waste material every day. Half of every butchered cow and a third of every pig is not consumed by humans. An estimated six to seven million dogs and cats are killed in animal shelters each year, said Jeff Frace, a spokesman for the American Society for the Prevention of Cruelty to Animals in New York City.

Along with the above material, the Rendering plants are unavoidably process toxic wastes as indicated below.

The following menu of unwanted ingredients often accompanies with dead animals and other raw material:

Euthanasia drugs that was given to pets

Insecticide Dursban in the form of cattle insecticide patches.

Other chemicals leak from antibiotics in livestock,

Skyrocketing labor costs are one of the economic factors forcing the corporate flesh-peddlers to cheat. It is far too costly for plant personnel to cut off flea collars or unwrap spoiled T-bone steaks. Every week, millions of packages of plastic-wrapped meat go through the rendering process and become one of the unwanted ingredients in animal feed.

The rendering plant floor is piled high with 'raw product' all waiting to be processed. In the 90-degree heat, the piles of dead animals seem to have a life of their own as millions of maggots swarm over the carcasses.

First the raw material is cut into small pieces and then transported to another auger for fine shredding. It is then cooked at 280 degrees for one hour. This process melts the meat away from bones in the hot 'soup.' This continuous batch cooking process goes on non-stop for 24 hours a day, seven days a week.

During this cooking process, the soup produces fat of yellow grease or tallow (animal fat) that rises to the top and is skimmed off. The cooked meat and bone are sent to a hammermill press, which squeezes out the remaining moisture and pulverizes the product into a gritty powder. Shaker screens remove excess hair and large bone chips. Now the following three products are produced:

Since these foods are exclusively use to feed animals, most state agency spot check and test for truth in labeling such as; does the percentage of protein, phosphorous and calcium match the rendering plant's claims; do the percentages meet state requirements? However, testing for pesticides and other toxins in animal feeds is incomplete or not done.

Every day, hundreds of rendering plants across the United States truck millions of tons of this 'food enhancer' to dairy industry, poultry ranches, cattle feed-lots, hog farms, fish-feed plants, and pet-food manufacturers. This food enhancer is mixed with other ingredients to feed the billions of animals.