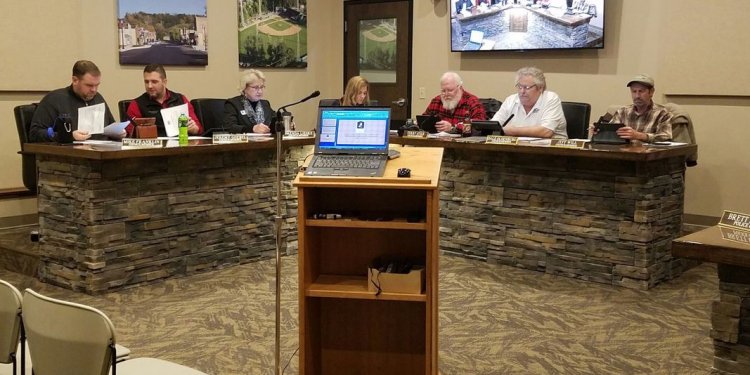 Christmas came early for members of the Jordan City Council, who met for just more than 20 minutes on Monday night to vote on a couple of agenda items and hear a few reports before adjourning for the year.

As of Friday, Dec. 16, Elite Waste in Jordan is no more. Owner Troy Schuette officially signed the garbage hauler business he has operated in Jordan for almost 10 years to Allied Waste Services of North America, LLC.

Jordan City Council members on Monday evening approved a refuse contract assignment that will allow Allied Waste Services to haul the city’s garbage and recycling through the end of the year. Beginning Jan. 1, 2017, Dick’s Sanitation out of Lakeville will be taking over garbage and recycling collection.

The sale will not come with layoffs – all of the employees will retain their jobs and Allied will continue to use the Elite Waste trucks for pickup.

“Stacey and I are very excited about partnering with Republic Services to purchase our company, ” Schuette said. “Going forward, Republic Services/Allied Waste will continue the Elite Waste Disposal tradition of providing the “Superior Service” our customers have come to expect and deserve over the years.”

Public Works Director Scott Haas informed council members that while efforts to create a hockey/skating rink have been ongoing, it has been a battle. Haas said they have been flooding the hockey rink six times a day and have gotten close, but when the sun came out Monday morning, the ice on the north side melted down to cement.

“We are trying as hard as we can...I am not sure what else we can do, but we keep on plugging away, ” Haas said.

In the event the hockey rink does not work, Haas said he wants eight to 10 inches of ice on the Mill Pond before he would clean off the pond for ice skating.

“They were great candidates, all of them – they all have something different to offer to the fire department. And those that applied that didn’t make the positions, I hope they do in the future because they are an asset to our fire department, ” said Mayor Tanya Velishek.

Beginning Jan. 3, 2017, Brian Drewry will be joining the Jordan Police Department as a new officer. Drewry will be filling the officer void that was made when Officer Angie Otto was hired as a school resource officer this fall. Drewry successfully completed a background check, medical exam, physical agility test and psychological assessment to qualify for the position.

The council approved transferring the liquor license for Jordan Wine & Spirits to Sanjeev and Ishita Gawde, contingent upon state approval to operate. The necessary background check was cleared.

The following items were approved unanimously as part of the consent agenda:

• Approval of the bills.

• A resolution stating that the city does not waive the monetary limits on municipal tort liability.

• A water supply plan to the Minnesota Department of Natural Resources. Between 2005-2015, Jordan added 541 new water connections and is serving 1, 400 more residents. The plan includes a projection of 1, 513 more residents by 2025.

Velishek and the council members all thanked Dale Oldenburg for stepping up to fill in on the council this year. The passing of Mike Shaw and subsequent appointment of Velishek as interim mayor left an empty council seat at the start of the year.

Oldenburg said he learned from his father, a former county commissioner, that when there is a need, you step forward.

“I am also a strong believer that you get back out of your community what you stick into it, ” Oldenburg said. “I am happy to have been of service and I am happy to be moving on.”

“It was very nice to see somebody step up when they were asked, ” council member Jeff Will said. “That is huge.”