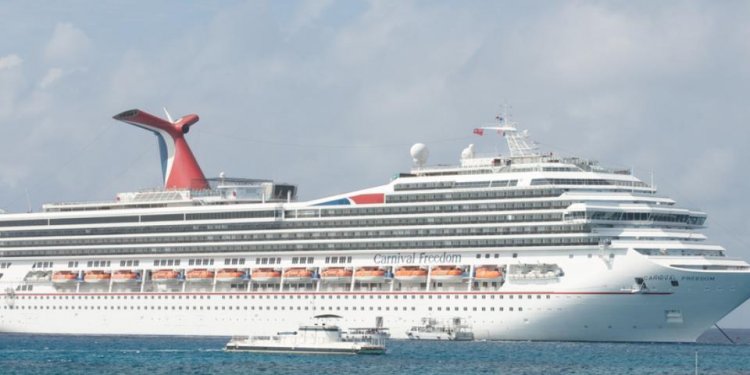 Some 20 million people board cruise ships every year. And while they might return to land with fond memories of umbrella drinks and shuffleboard, they leave a lot at sea. About a billion gallons (3.8 billion liters) of sewage (pdf), in fact.

That’s according to Friends of the Earth, a non-governmental environmental group, which used US Environmental Protection Agency data to calculate arrive at that gross figure. The EPA estimates that single 3, 000-person cruise ship pumps 150, 000 gallons of sewage—about 10 backyard swimming pools’ worth—into the ocean per week. One vessel in an EPA study produced 74, 000 gallons of sewage (pdf, p.2-1) in a single day.

The sewage dumped into the sea teems with bacteria, heavy metals, pathogens, viruses, pharmaceuticals, and other things that can harm the health of both humans and aquatic life. The best thing to do is to treat sewage and release it in the deep ocean (paywall). If released near coasts, untreated sewage can contaminate seafood, kill marine animals, and sicken swimmers.

A 2011 study of cruise ship discharge in the Caribbean concluded that high risks to human and ecological health accompanies both disposal of waste near land and in shallow waters.

When the cruise industry was small, the ocean could dilute its ejecta. But now the industry is among the fastest-growing segments of leisure tourism, and the total number of passengers has doubled in a decade. To capitalize on this surge, cruise companies are making ships bigger; the largest now carry as many as 8, 000.

The industry has also developed wastewater treatment systems, as Brett Jardine, a Cruise Lines International Association general manager, told Marine Executive. But two-fifths of the 167 cruise ships plying the oceans still use 35-year-old waste treatment technology, says Friends of the Earth. And though many US states have laws forbidding discharge in their waters, most coastal communities lack either the laws or the enforcement mechanisms.

Packing more and more people on board. (Reuters/Gary Cameron)

Treatment systems don’t do much to filter out nitrogen and phosphorous, rich in sewage, upon which algae feed. Algae can also be present in the shallow waters beyond the 12 nautical miles from shore in which cruise ships are allowed to dispose waste.

The nutrient gush from that discharge feeds the dense blooms that carpet oceans, and strip oxygen from the water, suffocating shellfish, corals, fish, and other marine life. For instance, algal blooms are thought to have killed 150 manatees off Florida’s coast, says FOE. (Note: cruise ships are hardly the only source of coastal sewage pollution, and sewage from coastal development was likely a factor in the manatee die-off.)

FOE gave six cruise lines—Disney, Norwegian, Celebrity, Royal Caribbean, Cunard, and Seabourn Cruises—A grades, and Holland America got a B+. Out of the nine lines remaining, four—Carnival, Silversea, Costa, and Crystal—earned failing grades. FOE failed all of the 16 cruise lines for “Transparency.”

Correction (Dec. 10, 2014, 9am EST): A previous version of this article reported that FOE estimates a billion tons of sewage are dumped per year. The correct unit is gallons.