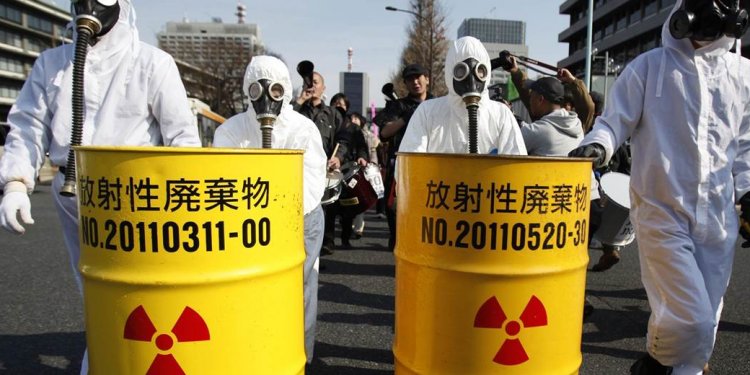 Drums containing contaminated materials from the US nuclear-defence programme are stored at the Waste Isolation Pilot Plant in New Mexico.

More than 600 metres below ground near Carlsbad, New Mexico, is the world's only operating deep geological repository currently accepting transuranic nuclear waste: that contaminated by elements heavier than uranium. The Waste Isolation Pilot Plant (WIPP), run by the US Department of Energy (DOE), is used to dispose of laboratory equipment, clothing and residues from the nation's nuclear-defence programme. In the past 15 years, around 91, 000 cubic metres (equivalent to covering a soccer field to a depth of about 13 metres) of such transuranic waste, mostly of relatively low radiation levels, has been placed there.

The main contaminants are long-lived isotopes of plutonium (mainly plutonium-239, with a half-life of 24, 100 years, and plutonium-240, with a half-life of 6, 560 years) and shorter-lived isotopes of americium and curium. In rooms carved out of a 250-million-year-old salt bed, the waste is stored in hundreds of thousands of plastic-lined steel drums. The repository is now at about half of its planned capacity and is to be sealed in 2033.

The DOE is responsible for performing safety assessments to ensure that WIPP will not exceed limits on exposure to radioactivity, as set by the US Environmental Protection Agency (EPA), for 10, 000 years.

But new demands are emerging. An arms-control agreement with Russia made in 2000 obliges the United States to dispose of 34 tonnes of plutonium from dismantled nuclear weapons. Following the terms of the agreement, the United States planned to convert the material into a fuel — mixed (uranium and plutonium) oxide, or MOX — to burn in commercial nuclear-power plants. But faced with soaring construction costs for a MOX fabrication facility at the Savannah River Site in South Carolina, the DOE has commissioned evaluations of alternatives.

The most recent report, published in August 2015, recommends burying the weapons' plutonium at WIPP. Judging the repository's performance to have been “successfully demonstrated”, the DOE's Red Team expert panel proposes that the 34 tonnes of weapons plutonium can be added to WIPP once it has been diluted to low concentrations comparable to that of the transuranic waste at WIPP.

In fact, WIPP's safety record is mixed. On 14 February 2014, a burst drum released small quantities of plutonium and americium to the surface (with a radioactivity of around 100 millicuries, or 3.7 gigabecquerels). Airborne radioactive material reached the surface through the ventilation system and spread 900 metres from the repository's exhaust shaft. Twenty-one workers were exposed to low levels of radioactivity, the highest dose equivalent to that from a chest X-ray. Nine days earlier, smoke from a burning truck filled the underground workings and shaft, damaging mechanical, electrical and ventilation systems.

The DOE says that such accidents do not compromise the long-term performance of the repository. We agree that they need not — if lessons are learned. Our concern is not the events' severity but that they were unanticipated. These accidents illustrate how difficult it is to predict potential failures of such a disposal system over millennia. For example, assumptions about the repository's geochemistry or the likelihood of drilling into it can lead to underestimates of the risks.

Before expanding WIPP's plutonium inventory, the DOE must examine more carefully its safety assesment for performance that stretches to 10, 000 years and beyond.

The 2014 radioactive leak at WIPP was caused by heat from a chemical reaction in a drum. Plutonium-contaminated nitrate salts, a waste product of plutonium purification at Los Alamos National Laboratory (LANL) in New Mexico, reacted with an organic, wheat-based commercial cat litter used as an absorbent for liquid wastes. The heat popped the lid. Although sensors detected the released radioactivity and diverted exhaust air through filters, some radioactive material leaked through. WIPP operators sealed the leak in the filtration system and sealed off the room in which the leak occurred. The breached drum remains in the repository.

“We cannot be certain that future inhabitants of the area will even know WIPP is there.”

Analyses of the accidents by the DOE have documented a lack of a 'safety culture' at WIPP. The facility's successful operation for 15 years had bred complacency. The failures were wide-ranging: in safety assessments, control of drum contents, installation and maintenance of equipment, and preparation for an accident. An investigation of the drum-packaging procedure, for example, found “no evidence that any type of technical evaluation occurred” when selecting the organic absorbent material, even though its incompatibility with nitrate salts had been raised at LANL during waste packaging.

From a systems-analysis perspective, the drum breach was a 'normal' accident — a human mistake that led to a cascade of errors and breakdowns, exacerbated by a failure to enforce safety protocols. Complex technologies are prone to unanticipated failures that can progress quickly; examples include the 1979 Three Mile Island nuclear-plant meltdown in Pennsylvania and the 1986 Challenger space-shuttle explosion. Such accidents cannot be easily predicted, but a system designed with failure in mind can mitigate the risk.

The WIPP accident can be taken as a positive — it presents an opportunity to learn. The DOE has aggressively identified its causes and implemented corrective actions; incompatible chemicals are no longer mixed in the drums. But once the repository is closed, its contents cannot be monitored or problems fixed. We cannot be certain that future inhabitants of the area will even know that WIPP is there. To put the timescales in perspective, agriculture was developed just over 10, 000 years ago.

WIPP's present safety assessment addresses two scenarios: first, undisturbed performance and, second, human intrusion, such as inadvertently drilling through the repository in search of oil and gas. The first foresees that after closure, the salt into which the repository is built will deform and flow around the drums to encase the waste. The model assumes that no fluids, such as brine, are present and that the site remains geologically isolated. Although the drums will be crushed, the radioactive material will be locked in the dry, solid salt, with no way to release radioactivity to the biosphere. Reliance on the geological barrier is so great that the form and composition of the waste is assumed to be unimportant; it need not even be treated.

Human intrusion could release radioactivity to the environment. Salt deposits, layered as sediments or as salt domes, are often associated with mineral and energy resources, such as potash and hydrocarbons — oil and gas. In southeastern New Mexico, exploration for and extraction of these fuels has led to extensive drilling in the Permian Basin, where WIPP is located.

Can’t wait to try out the textured plastering…
April 9, 2021