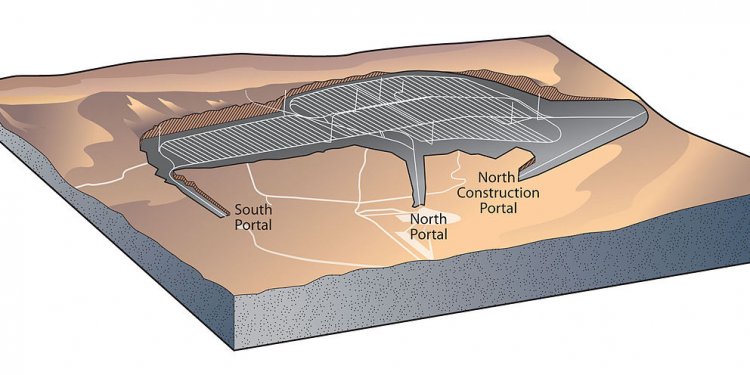 An abandoned tunnel in the desolate Nevada desert, barricaded only by a chain-link fence, is all that remains of the nation’s tortured effort to create a permanent repository for nuclear waste 100 miles northwest of Las Vegas.

After spending $11 billion, the Energy Department met with unrelenting opposition from Nevada and was forced to shut down the program at Yucca Mountain — the only remotely viable option for storing tons of deadly waste that currently has nowhere to go — in 2010.

But that was before Nevada’s powerful senior senator, former Senate Majority Leader Harry Reid, retired in January. It was before the election of President Trump, who is looking for a way to keep nuclear power plants operational. Oblivious to the storm of fury it would arouse in Nevada — which doesn’t have a single commercial nuclear reactor of its own — Trump has proposed spending $120 million to restart licensing Yucca Mountain to take on a massive storehouse of deadly radioactive spent fuel.

The plan to ship waste from reactors all over the nation to Yucca Mountain and bury it deep in volcanic rock has dragged on for 30 years, ranking among the most intractable political, legal and technical issues in modern U.S. history.

The prospects for Yucca Mountain have fluctuated so many times that its future is unpredictable. But the Trump initiative could bring closure to dozens of communities desperate to get rid of nuclear stockpiles they consider a frightening safety threat.

At an estimated cost of $100 billion, the Yucca Mountain nuclear waste dump would rival the International Space Station in cost and complexity, requiring construction of roughly 300 miles of new railroad tracks to transport the waste, development of advanced robots to work underground and fabrication of special titanium shields to keep the waste intact for, it is hoped, hundreds of thousands of years.

The $120 million outlined by Trump this month in his budget blueprint would restart the ponderous licensing process that was abandoned by the Obama administration and begin plans for a temporary storage facility at an undetermined location.

With 99 operating reactors, supplying about 20% of the nation’s electricity, and four more under construction, the nuclear industry considers a permanent storage facility such as Yucca Mountain to be a top priority. About two dozen more retired or demolished plants have stranded waste in need of a permanent home.

Proponents say the dump will provide safe disposal for waste parked at power plants from the shores of the Pacific in California to the banks of the James River in Virginia. The waste, which generates enormous heat from nuclear decay, would be placed in side rooms off the existing five-mile-long main tunnel.

The nation’s utilities have a total of 79, 000 metric tons of spent fuel already in reserve, and are producing another 2, 000 tons every year. Yucca Mountain’s legal limit is 70, 000 tons, though the site has the physical capacity to handle all the existing waste and much more.

Nevada officials have put every ounce of their political muscle into stopping the dump, worried that a radioactive spill or even the possibility of one could destroy their tourist economy. There are also fears that, in the distant future, the dump might leak radioactivity into groundwater supplies — that has happened at several Energy Department plants. The state is quickly gearing up for a new fight, readying new legal strategies and pushing a resolution through the state Legislature.

“The Trump administration’s attempt to revive Yucca Mountain is naive and a waste of taxpayer dollars, ” said Sen. Catherine Cortez Masto (D-Nev.), who successfully fought off the Energy Department for years when she was the state’s attorney general. “It is a nonstarter.”

Cortez Masto said the state is united against the dump across party lines, including Republican Gov. Brian Sandoval, another former attorney general.

“Yucca Mountain is just a hole in the ground, ” she said in an interview. “It is time for members of Congress to recognize that Yucca Mountain won’t work.”

Energy Secretary Rick Perry made a low-key visit to Yucca Mountain on Monday and met with Sandoval afterward, saying it was “the first step in a process that will involve talking with many federal, state, local and commercial stakeholders.”

Sandoval said he had “reaffirmed my unwavering opposition to any potential progress toward developing the site as a potential destination for high-level nuclear waste.”